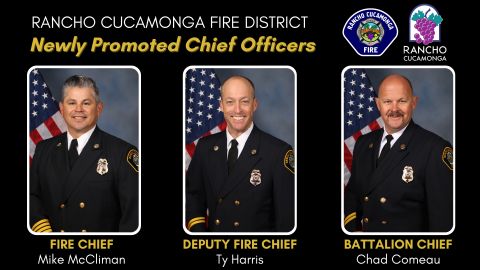 Fire Chief McCliman has been with the Rancho Cucamonga Fire District for 20 years. Throughout his career he has served within the Burn Cadre and Vision Team, was an academy Instructor for RIC and Ventilation, and served as the president for the Firefighter Association for 7 years of his 15-year membership. After promoting through the ranks, Chief McCliman was promoted to Deputy Fire Chief of Administration in July of 2017. He holds a bachelor's degree in Organizational Leadership from the University of Louisville and a master's degree in Conflict Resolution and Negotiations from California State Dominguez Hills.

Battalion Chief Comeau was hired to the Rancho Cucamonga Fire District in 2003. His experience includes; Academy Leader, member of the Technical Rescue Team, founding member of the Pipes & Drums Band, and for 11 years served on the Labor Leadership Committee, seven of those years as president. Battalion Chief Comeau holds a bachelor's degree in Organizational Leadership from Waldorf University in Iowa.