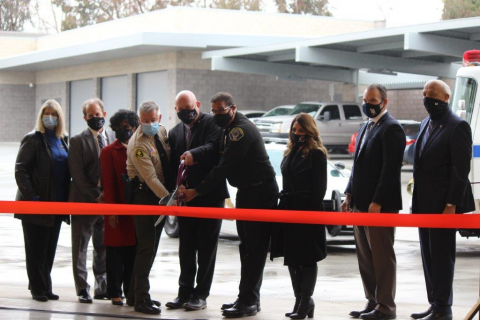 The City of Rancho Cucamonga is excited to announce the opening of the new Public Safety Facility, located at 8870 San Bernardino Road, on the west-end of the City. The new building houses the relocated Fire Station #172 previously to the east at 9612 San Bernardino Road and offers a police substation for residents to file reports and conduct other business.

Originally built in 1948 with the Cucamonga Fire Department, the familiar San Bernardino Road Fire Station #172, had served this community for over 70 years. Existing personnel relocated to the new facility on February 19, 2021 to a state-of-the-art building that provides modern amenities and will better serve the growing community. The Rancho Cucamonga Police Department will be staffing the police substation later this month.

“It is a City Council core value to promote and enhance a safe and healthy community for all,” said Mayor L. Dennis Michael. “This building is a symbol of our dedication to keeping our community as safe as possible for many generations to come.”

The Public Safety Facility was completed in just under 18 months as the official ground-breaking ceremony was held on September 17, 2019. This was only possible due to the tireless work done by the City’s Engineering, Planning, Building and Safety staff along with the San Bernardino County Sheriff's Department, Rancho Cucamonga Fire District, HMC Architects, Erickson-Hall Construction and RC Construction.

The unique facility is a forward-thinking approach to house both fire and police services under one roof, as there are not many like it in the region. To learn more about the facility and its history, Click Here to watch a full recording of the ribbon cutting ceremony held on March 3, 2021.

The City of Rancho Cucamonga encompasses nearly 47 square miles and is located 40 miles east of Los Angeles; considered to be the premier city in the Inland Empire, Rancho Cucamonga is one of the fastest growing metropolitan areas in Southern California with a current population of over 179,000 residents. Information regarding the City and the programs and services provided to the community can be found at www.CityofRC.us, via Facebook, Twitter, and Instagram. The Rancho Cucamonga Fire District provides vital fire and life safety services to residents, visitors, and businesses in a 50 square mile area.  Stay connected with Rancho Cucamonga Fire District by visiting us at www.RCfire.org and on Facebook, Twitter, and Instagram.