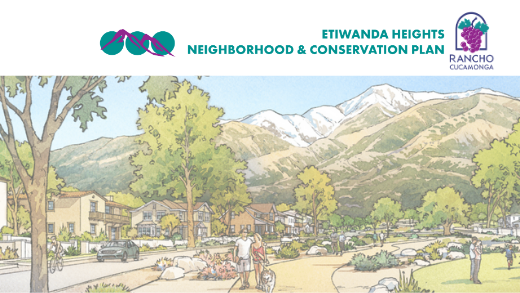 On Monday, November 9, 2020, San Bernardino County’s Local Agency Formation Commission (LAFCO) approved the annexation of approximately 4,085 acres from the County of San Bernardino to be incorporated into the City of Rancho Cucamonga.

For nearly forty years, the City has held a vision to preserve the natural and rural character and environment of the front country above the foothill neighborhoods. The City’s first General Plan articulated the intent that the natural and rural character and environments be preserved, that the natural habitats be conserved and managed, and that any future development be low in density and authentically rural in character. With LAFCO’s approval of the annexation on November 9, this idea for the conservation of the front country described so long ago is one step closer to being realized.

When the process of annexing the land began, the City embarked on a community-based planning process that became formally named the Etiwanda Heights Neighborhood and Conservation Plan, which communicates both the location of the planning area within the City and the intended purpose of the plan. The plan was adopted nearly one year ago, lays out a comprehensive strategy for conserving 3,603 acres and the development of a 790-acre neighborhood. The vision in the plan was renewed after extensive participation and input from community members. The City engaged with over 200,000 people online and over 1,500 people through workshops, small-group meetings, and an open house.

Based on the community's expressed interest in exercising local control over these 4,000-plus acres, the community-based planning process re-emphasized the vision for limited single-family neighborhoods and extensive open space. Community input helped define a mixture of housing types, neighborhood amenities, and conservation areas that support that vision. Below are some of the significant plan details:

The annexation extended the City’s boundaries by 6.3 miles, making the City nearly 47 square miles as shown in the new boundary map. Previously released documents and informational videos related to the annexation and the Etiwanda Heights Neighborhood and Conservation Plan are available online at www.CityofRC.us/EtiwandaHeights. The City appreciates the time and effort that residents invested in this community-based planning process. As Rancho Cucamonga matures, it is important to the City Council to engage with as many community members as possible to ensure Rancho Cucamonga remains a world-class community.