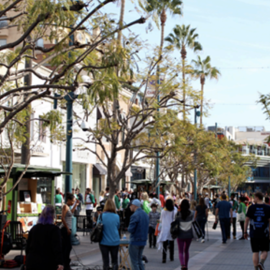 The Inland Empire is similar in size and population as many states, yet it does not have a clear economic or cultural center. This fact was identified and discussed multiple times during the public outreach process and the community repeatedly articulated a desire to set the example and lead the region. As the city transitions from a sprawling suburban growth model to a more sustainable urban growth model, it is important to remember that people are at the core of what makes a city. Through the community engagement process, the concept of creating vibrant activity nodes and a “real downtown” resonated deeply with people of all ages from all areas of the city. A downtown area, or several major activity centers, with varied cultural opportunities and public art, will provide areas for social, civic, and commercial activity. By creating vibrant, high value places, Rancho Cucamonga will not only ensure its fiscal sustainability and resiliency, but will also distinguish itself as the cultural and economic hub of the Inland Empire. This General Plan envisions a future Rancho Cucamonga with a stronger sense of place, higher quality of life, and more competitive economy.