On Monday, October 24, 2022, Assemblymember Holden, District 41, presented the City of Rancho Cucamonga with a check for $1.9 Million for the implementation of an Early Wildfire Detection System. The $1.9 Million will cover the installation of a newly available early wildfire detection system along the City’s northern boundary, following the wildland-urban interface to the Alta Loma and Etiwanda neighborhoods along the foothills of the San Gabriel mountains. The system will provide rapid detection, reporting, and response to wildfires.

“The FireBIRD system has the potential to save significant costs and resources. Early detection allows local jurisdictions to effectively respond to wildfires at its earliest stage with a goal to minimize fire spread thereby decreasing overall number of resources committed to the incident.”

The northern boundary of the City of Rancho Cucamonga consists of a wildland-urban interface between the residential Alta Loma and Etiwanda neighborhoods and the foothills of the San Gabriel mountains in the Very High Fire Hazard Severity Zone. This area is particularly vulnerable to the risks of wildfire due to the rugged terrain and high wind events caused by gusting Santa Ana winds which can cause wildfires to spread rapidly. In 2003, the Grand Prix Fire, part of the Grand Prix incident – Padua – Old Wildfire complex which caused an estimated $1.3 billion in damages. The area also experienced the 2014 Etiwanda Fire, and most recently in 2020, the Thorpe Fire, igniting a small fire near Almond and Mai Streets.

The proposed FIREBird wildfire detection system is produced by Lindsey FireSense LLC, of Azusa, CA. The FIREBird system is designed specifically to detect and report wildfires as small as 5 x 5 feet, up to a detectable distance of 900 feet, typically in less than two minutes. Rapid detection results in faster fire response and smaller fires to contain. The goal of the system is to save significant resources, money, and most importantly, lives.

The funding allows for the installation of the FIREBird camera units along the City’s northern border and provides funds for ongoing training, maintenance, and implementation.

The City of Rancho Cucamonga and the Rancho Cucamonga Fire District would like to thank Assemblymember Holden for championing the $1.9 Million funding for the FIREBird wildfire detection system. The system will aid in the rapid deployment of our local resources resulting in the preservation of the natural resources and the historically significant areas within the wildland-urban interface. 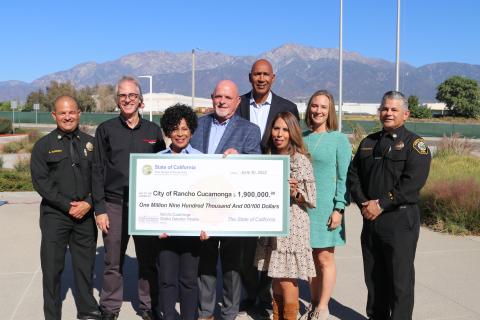