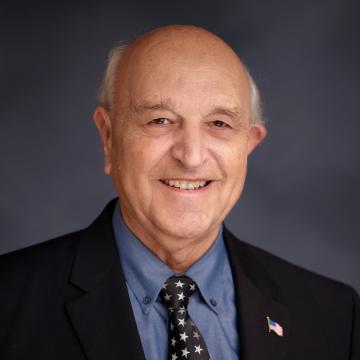 Council Member Sam Spagnolo is a forty-two-year resident of Rancho Cucamonga. He has been married for fifty years to Vi, and is the father of three children and has seven grandchildren.

Sam was educated locally at Chaffey College, has attended numerous other regional and out-of-state education and certification forums. He is a retired Fire Captain with thirty-five years of service. Sam Spagnolo retired from the City (Rancho Cucamonga Firefighters Association) on December 31, 2003. Sam served many of those years as an elected officer in Local 2274, where he built coalitions benefiting the public safety.

Sam has been involved in many community charities, even initiating several life-saving programs. For his efforts, Sam has received numerous accolades and recognitions for his service.

Sam received Congressional Recognition for "Grand Prix" Firefighting in 2003, the Fire Quest Volunteer Award in 2002, the City's Harvest Award in 2001, and the Cucamonga Peak Award in 1998.

Sam is the creator of the Ashley Smith Fund for child burn victims, founder of the City's CPR and first-aid program, volunteers for "Spark of Love," Toy Drive, and is a past Board Member for American Heart Association.

Sam was elected to the Rancho Cucamonga City Council in November 2004, and re-elected in 2008, 2012, 2016, and 2020. He serves as President of the League of California Cities Inland Empire Division and as Chair of the Omnitrans Board of Directors.