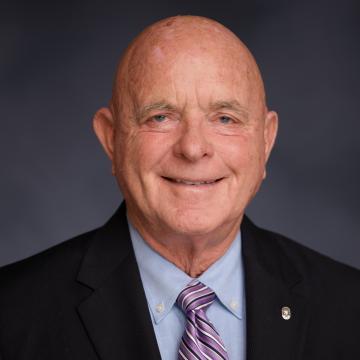 Mayor L. Dennis Michael is a life-long resident of Rancho Cucamonga. He is married to Dr. Regina Holt-Michael, a retired Chiropractor. Dennis is the father of two children, five lovely grandchildren and six great grandchildren.

Dennis received his education in Rancho Cucamonga including attending Chaffey College. He began his career as a firefighter with Rancho Cucamonga Fire District in April 1976; promoting through the ranks to Engineer, Captain, Battalion Chief, and Division Chief. He was appointed Fire Chief in 1984, and he held that position for nineteen years until his official retirement on December 29, 2003.

During his career, Dennis led the development of the Rancho Cucamonga Fire Protection District, as well as guided the organization through the growth and development of a small town into a city of 177,000 residents.

Dennis Michael has extensive experience through his professional career in numerous organizations and community charities, including: the State Board of Fire Services, the California Fire Chiefs Association, Past Chairman of the San Bernardino County Emergency Medical Care Committee, the West End Communications Authority, the Fire District Association of California, the San Bernardino County Fire Chiefs Association, the Rancho Cucamonga Family YMCA, the Boy Scouts, the Rancho Cucamonga Rotary Club, and the Burn Institute - Inland Empire, which Chief Michael was instrumental in forming.

Dennis spearheaded the development and completion of the Jersey, Banyan, and East Avenue Fire Stations, the Fire Maintenance Facility, and initiated the construction of a permanent home for the Day Creek Fire Station.

In addition, during Dennis' tenure, he oversaw the phased development of the Department's Technical Rescue, Hazmat, and Wildland Fire response teams; as well as being instrumental in facilitating the public-private partnership with AMR and initiated Fire District paramedic services in 1996. Through his work and volunteering, he has received numerous accolades and recognitions for his service.

Dennis was elected to the Rancho Cucamonga City Council in November 2004, 2008 and was elected Mayor in 2010, 2014, 2018 and 2022.  He is actively involved in a number of regional and state boards and committees.  Dennis is a Past President on the League of California Cities statewide Board of Directors and the League’s Inland Empire Division. In 2013, he was the recipient of their prestigious Thalman Award in recognition of his dedication to advancing the principals of local government.

Dennis currently serves as Past President on  the San  Bernardino County Transportation Authority  (SBCTA) Board  of  Directors,  as  well  as  being  a member  of  SBCTA's Metro  Valley  and Commuter Rail/Transit Committees.  He is the City’s Delegate to Southern California Association of Government’s (SCAG) Regional Council representing cities of Rancho Cucamonga, Upland, and Montclair and is a member of their Transportation Policy Committee. Dennis also serves on the Inland Empire Economic Partnership’s (IEEP) Board of Directors.