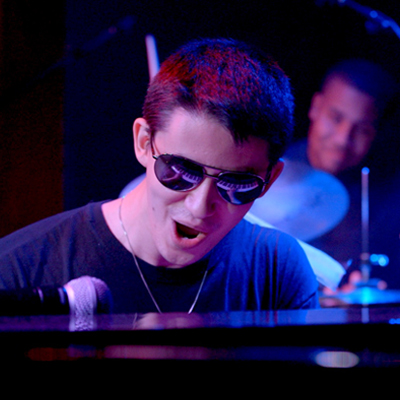 With years of dedication, Justin Kauflin has proven himself to be an extraordinary pianist of rare talent. After losing his sight as a preteen, the undeterred classically-trained musician gravitated towards playing jazz piano, producing his first album Introducing Justin Kauflin at the age of 23. Justin gained international attention after
the release of the award-winning documentary Keep on Keepin’ On, for which he composed the music. Justin and his trio continue to tour the world and recently
released the album Coming Home, produced by Quincy Jones.

DOCUMENTARY SCREENING: Included in your ticket is the 7:00 p.m. screening of Keep on Keepin’ On, the 2014 documentary following the mentorship between jazz legend Clark Terry and piano prodigy Justin Kauflin. Running time: 1 hour, 24 minutes. Live concert following at 9:00 p.m.